7 Most Useful Foreign Languages to Learn in India in 2022 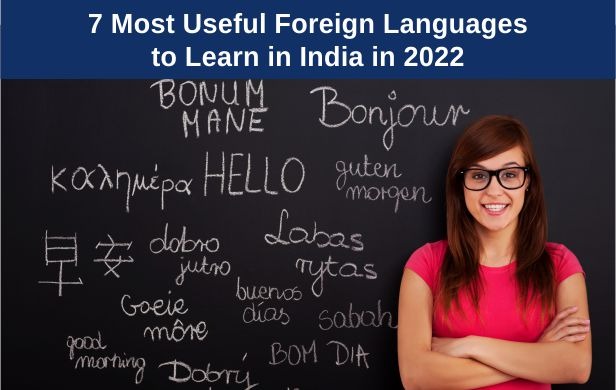 The last decade has seen the development of excellent digital and linguistic interconnectivity between countries from all over the world.


Learning a new foreign language is one of the best ways to be culturally and linguistically prepared to function as a contributing member of society in today’s world. Studying a new language and culture can also be a great way to boost confidence and improve skills such as problem-solving and abstract reasoning.


Finally, learning foreign languages in today’s highly-competitive world can be an excellent way to gain an edge over your peers in the industry.


If you are sold on the concept of picking up a new language skill, here are the 7 most useful foreign languages to learn in India in 2022!


Choosing the right foreign language that is most aligned with your interest, expectations, and goals is a very subjective thing and can vary from person to person.


You may also want to take into consideration the fact that each language demands a different amount of time, effort, and persistence to achieve mastery.

Statistics indicate that more than 1 lakh students study French as a second language in Delhi (NCR) alone! Including other cities in the equation will result in a staggeringly high number!


French is one of the best foreign languages to learn, especially if you are career-oriented and looking for linguistic leverages in the future.


Several multinational organizations use French as a working language across a wide range of industries. These include aeronautics, luxury goods, automotive, education, retail, and import & export services.French is also spoken across 5 different continents and is recognized as the second most-studied language in the world.

After French, German is regarded as the second most popular foreign language amongst the Indians. It is also identified as the most spoken native language in Europe and the second most commonly used language on the internet.


While German may be known to be easier than French, it does have significantly more challenging syntax. Several schools and higher education institutions in India have also listed German as an optional language, while in some universities, German is a compulsory subject.


Germany, as a country, is Europe’s largest economy and the world’s second-largest exporter. This makes the scope of learning German full of immense job opportunities and well paid salaries.

Spanish is the third-most-popular foreign language to learn in India after French & German. Additionally, Spanish is also spoken in more than 20 different countries across the world.


There are several reasons why studying Spanish can be beneficial in India. With this skill, you can pursue numerous career paths in international business, foreign service, journalism, and travel & tourism.


There is also a wide range of opportunities available in language teaching, interpretation, translation, and BPO services if you are proficient in Spanish.


Finally, the growing business and economic relationship between India and Hispanic countries highlight the need for fluent Spanish speakers in the country.

Japanese is one of the most popular East-Asian languages that you should consider learning. The demand for Japanese skills in India is skyrocketing as the trade relationship between the two countries is increasing.


The ability to fluently speak and communicate in Japanese can significantly enhance your employability prospects all over the world. You can also demand a higher-paid employment opportunity if you can successfully clear a Japanese test like JLPT N2/N1.


As a language, Japanese has a reputation for being very difficult to learn. However, regular practice can ensure that you become fluent.

One in every five people in the world speaks this Chinese language. Mandarin is also often referred to as the “language of the future”.

Your understanding of the significance of learning Mandarin can be highlighted by recognizing China’s role in the global economy. Learning this tongue, therefore, opens a wide range of opportunities in the lucrative world of business.

As a language, Russian has been popular in India for a long time. It is, geographically, the most widespread language of Eurasia.


Learning Russian can be a great way to open opportunities in the defense sector, oil & gas, science & technology, and engineering. This is primarily because of the continued friendly ties that India has with Russia.


Russian is also a language that gives you access to the rich scientific literature of the country, a measure of Russian soft power.

Korean is the official language of North and South Korea, of which the latter has a steadily growing economy and the 7th largest export economy globally.


The population’s interest in the Korean language is skyrocketing owing to the tremendous demand for Korean products from organisations such as Lotte, Hyundai, LG, and Samsung.


Additionally, the growing teen interest in K-Drama, K-Pop, and K-Movies is birthing an era of independent Korean language education in India.


Learning Korean is a remarkable way to increase your potential employability and job opportunities in Indian and Korean organisations. You can also expect a significant increase in your earning potential by learning this language!


When choosing a new language that you want to acquire in 2022, remember - the sky is the limit!


You can also read our blog Which foreign language should I learn in India?


There is no dearth to the number of global opportunities you can avail yourself of by picking up one of these 7 best foreign languages to learn in India! Remember to choose a language that is most aligned with your personal interests, professional goals, and long-term objectives.