Why Should Students Learn a Foreign Language? 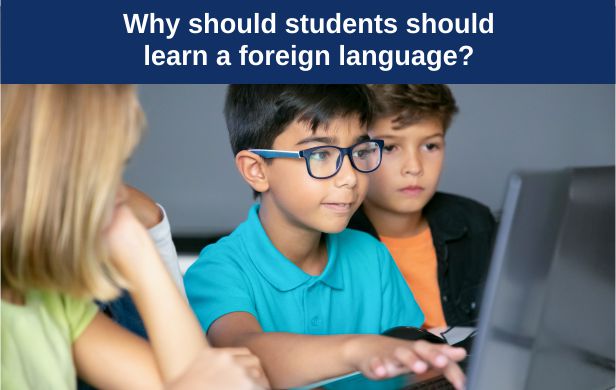 Languages play a vital role in facilitating human connection and interaction globally. As a tool, language can help us share a wide range of concepts, ideas, thoughts, and emotions. Languages are often the cornerstone of different societies and have an important role to play in building the concept of community.


However, is being fluent in one language enough? As per studies, there is now an increasing amount of emphasis that is being placed on picking up the skill of a new foreign language. This is especially relevant to the global student community.


Keep reading to learn more about the 7 reasons why students should learn a foreign language!

7 Reasons Why Students Should Learn a Foreign Language

In the formative stages of their academic careers, students are often considered to be figurative “sponges” that soak a wide variety of information & new concepts!


Therefore, introducing a new foreign language during schooling years can play an important role in shaping a student’s core skills and foundational knowledge.

One of the most rewarding and satisfying aspects of the human experience is our ability to connect, communicate, and interact with others. Being able to communicate with an individual in their language is, therefore, an incredible gift that can present several advantages.


By learning a new language, students are presented with the skills needed to dramatically increase the range of people they can communicate with. Learning a new foreign language can, quite literally, open up your world!


By learning how to converse with people from other countries in their tongue, students can learn a great deal about new cultures, societal beliefs, and concepts!


The hypothesis this scenario presents is that the effort to choose a language at a particular time provides “mental gymnastics” for students. This is, therefore, an excellent way to develop your brain and critical thinking abilities.

Learning a foreign language has been recognized to have a direct impact on the improvement of analytical skills. In order to learn a new language, students will often engage with a wide range of complex cognitive strategies. These include abstract concept visualization and reasoning skills.


As a result, students are more likely to develop comprehensive analytical abilities that can be applied to several different spheres of their lives!

4. A Competitive Edge in the Corporate World

It is no secret that learning a foreign language can significantly enhance a student’s employment prospects. More and more organizations across the world are now seeking professionals who are skilled in two or more foreign languages.


As a student and potential working member of society, your ability to speak a foreign tongue can provide you with a competitive advantage in the corporate world. With globalization being at the forefront of the information era, being able to converse fluently in another language can help you attract lucrative opportunities.

With knowledge of a foreign language, students can often enjoy several occasions to interact with new & interesting people. Being able to converse and interact with peers from other nationalities can facilitate the creation of lifelong friendships.


As a student, being able to communicate in another language can significantly improve your pool of potential friends. This skill also acts as a common denominator when you are interacting with native speakers.

The study of foreign languages is often one of the first subjects associated with basic liberal education. Learning a new language and soaking withan entirely new culture and worldview is one of the best ways for a student to become open-minded, tolerant, and understanding.


The perspective that is brought about with knowledge of a foreign language can have an important role to play in facilitating social behavior. This is precisely why learning a foreign language is often regarded as an eye-opening experience!

Students are often encouraged to explore different forms of art and science across cultures and nationalities. The study of a foreign language acts as a gateway to appreciating a wide range of subjects including -

If you enjoy exploring different kinds of subjects, cultures, concepts, and ideas, one of the most rewarding ways of broadening your mind is by picking up a new language!


The benefits of learning foreign languages for students are plenty and profound! From being able to easily cross linguistic & cultural barriers to deepening intellectual curiosity & analytical skills, language learning is an essential part of a student’s academic journey!


As Ludwig Wittgenstein once said -