The Most Spoken Languages in the World 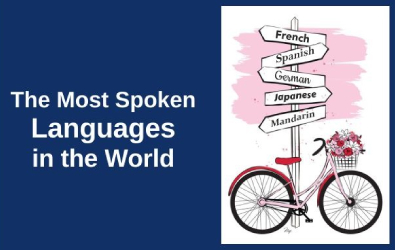 The Most Spoken Languages in the World

Although this article has been written in English, did you know that only 33% of the world’s population actually considers it a native language? 33% in an English-speaking population of 1 billion! That brings us to the question - which are the most commonly spoken languages around the world?

Before we dive into the mind-boggling statistics on spoken languages (that might just include a surprise or two - you’ve been warned!), it is important to understand what exactly a language is.

Definitions from recognized sources can often blur out the understanding of a concept. From the social perspective, languages are an integration of various political and cultural factors, including the identity and heritage of a social group.

Knowing what the total number of speakers of a language is can be very useful in determining which languages to choose for communicating to your customers. It goes without saying that the more popular a language is, the greater is the demand for professional translation services of that language. Therefore, understanding the most spoken languages in terms of the total number of speakers can be a useful determinant in choosing the right services.

The top 7 most spoken languages determined by the total number of speakers are:

English has proven to be a remarkably successful language used around a spectrum of applications. From travel, business, and international relations, to website blogs just like the one you are reading right now, English is spoken by as many as 370-million people in the world who speak it as a first language. This is as opposed to the 978 million who speak it as a second language!

If you are looking to up your language skills and add another tongue to your skill sets, consider picking up Mandarin. This is a language that is spoken by 1 in 6 people globally. And if you are confused between what Chinese and Mandarin are - Chinese is the name given to the family of dialects and tongues spoken in the East, whereas Mandarin is spoken in Mainland China specifically.

Did you know that jungle and shampoo are words that have come from Hindi? This is the chief language of India (spoken in Pakistan as well) and uses the devnagri script. At least 40% of Indians understand Hindi and this makes it one of the most commonly used and understood Indian languages.

Spanish is a language that is known to pique the curiosity of many. Primarily spoken in Spain and Central and South America, in United States of America, it is the second most spoken language!

Arabic constitutes the language of around 274 million of the total speakers in the world. But this language is not one that can be defined by its numbers. As Chinese, it is a name given to a family of different dialects, spoken in 40+ countries.

Now this one may have caught you by surprise! The British Partition of Bengal in 1947 divided West Bengal and East Bengal (the latter is now known as Bangladesh) and the language (though slightly different and known as Bangla in Bangladesh) is now native to both of these territories. Here’s an interesting projection - the population of Bengali speakers is expected to double by the next century!

Oui, the language of love makes an appearance in the top 7 most commonly spoken languages in the world. You may have been among the many who choose French in school. Given the romantic associations to the language and the beautiful country of France, many have chosen to pick this tongue up as a skill worth putting to good use! It is spoken in France, Canada, many African countries, and Polynesia.


In addition to the above languages, Russian, Portuguese, and Urdu have also made it to the list of top 10 most commonly-spoken languages, thus leading to rising demand for professional language services. This is where Language Services Bureau steps in.


- we offer a multitude of language services like localization, translation, interpretation, and corporate language training in as many as 100+ globally recognized languages. From Assamese to Burmese, Bulgarian and Russian, we support more than 120+ language combinations and have the translation services and learning solutions to all of your needs!