Scope for Indian Languages in the Language Industry job Market 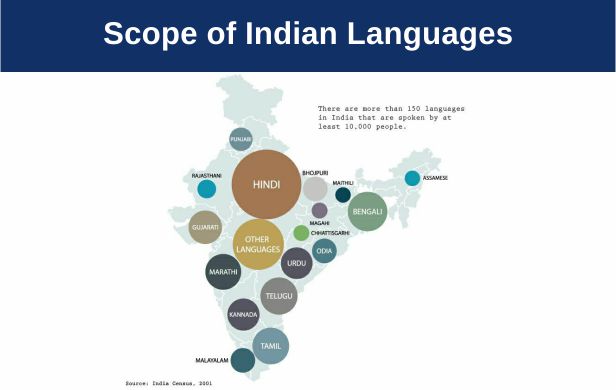 India has a rich cultural and linguistic heritage and is home to various languages. From Tollywood to Inter-State Council meetings, the scope for Indian language experts has widened and expanded as the world needs to communicate with the remote Indian audience without English language knowledge.


India is the world's seventh-largest country in terms of land area and the world's second-most populous country with a population of almost 138 million people. 10,000 or more people speak around 121 languages in India and with more than 19,500 languages or dialects accepted and spoken as the ‘mother-tongue’, linguistic diversity leads to a great intermixing of career opportunities for linguists.

Hindi is the most widely spoken language in India. It is one of the country's official languages, along with English. According to the 2011 census, the number of persons who speak Hindi as a first language has grown since the 2001 census. In 2001, 41.03 percent of the population spoke Hindi as their mother tongue; by 2011, that figure had risen to 43.63 percent. Hindi is the world's fourth most spoken language after Mandarin, Spanish, and English. There are currently 52, 83, 47,193 Hindi speakers in India. It is spoken in nearly every state in India, including Uttar Pradesh, Bihar, Uttarakhand, Rajasthan, Madhya Pradesh, Chhattisgarh, Himachal Pradesh, and Delhi.


Hindi is a Sanskrit descendant influenced by Dravidian, Arabic, Portuguese, English, Persian, and Turkish languages. Awadi, Braj, and khadi bhasha are among the dialects of Hindi.

Bengali is India's second most spoken language, spoken by 9.72 crore inhabitants, or 8.03 percent of the entire population.


Bengali is an Indian-Aryan language that is primarily spoken in South Asia. It is the most widely spoken language in many states, including the Andaman and Nicobar Islands in northeast India. Bengali began as a secular language of old Indo-Aryans and was influenced by Persian and Arabic. The usage, pronunciation, words, and phonetic form of this language is one of the most diverse and versatile across states. Bengali is primarily spoken in the eastern Indian states of West Bengal, Jharkhand, Assam, and Tripura. It is also spoken in countries like the Middle East, the United States, Australia, Japan, the United Kingdom, and Canada. Bengali is also offered as a course at Karachi University.


Did you know that the Indian national anthem was written in Bengali?

Marathi is spoken by 8.30 crore people in the country, accounting for 6.86 percent of the total population.


Marathi is an Indo-Aryan language born from Sanskrit that is the official language of the western states of India, including Goa and Maharashtra. It is spoken in approximately 42 dialects across the state. It is mutually intelligible with Hindi and Gujarati.


Did you know that Marathi grammar has three genders?


The hypothesis this scenario presents is that the effort to choose a language at a particular time provides “mental gymnastics” for students. This is, therefore, an excellent way to develop your brain and critical thinking abilities.

Telugu is a Dravidian language spoken extensively in various Indian states. This language is primarily spoken in the states of Andhra Pradesh, Telangana.Yanam. Beraad, Wadaga, Domara, Salavari, Nellore, Comtao, and Kamathi are among the dialects used in its speech. It is spoken in many countries, including the United States, the United Kingdom, New Zealand, Australia, the United Arab Emirates, and South Africa.

The Tamil language's roots are linked to the Dravidian language family. It is the official language of both Singapore and Sri Lanka. Tamil is extensively spoken in India, with around 6.90 crore people speaking Tamil in the country.


Do you know that Tamil is considered one of the world's oldest living languages? It has a literary tradition that dates back over 2,000 years.

Good language abilities are vital for success in any job, from copywriter to editor.

If you are looking for job opportunities in the translation or interpretation sector, you can submit your applications at careers@languageservicesbureau.com