10 Most Spoken Languages in India 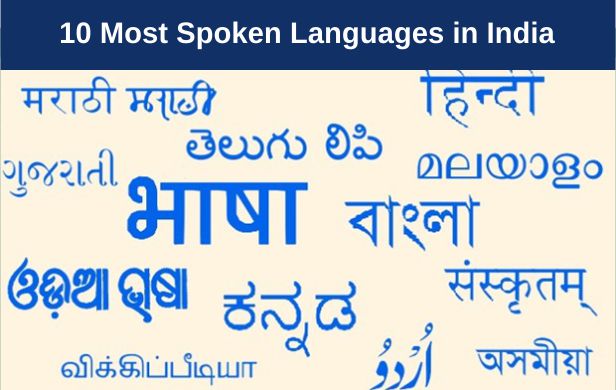 India is a country rich in culture, history, and of course, languages. As you travel around India, you will hear a variety of languages and accents.


So, exactly how many Indian languages exist?


While India has 22 distinct official languages, the country also boasts of 121 languages and 270 mother tongues. It is also the home of Sanskrit, which is among the world's oldest languages.

Hindi is one of the official languages of India. It is the most widely spoken language in the country. Hindi is used as a supplemental language in all federal recruitment exams for many significant agencies, institutes, and banks. It is spoken in nearly every state in India, including Uttar Pradesh, Bihar, Uttarakhand, Rajasthan, Madhya Pradesh, Chhattisgarh, Himachal Pradesh, and Delhi. 14th September is celebrated as Hindi Diwas when the Constituent Assembly of India took the decision to make Hindi the official language of the Union Government.


Hindi is of Sanskrit descent and has been influenced by Dravidian, Arabic, Portuguese, English, Persian, and Turkish languages. Awadi, Braj, and Khadi bhasha are among the languages spoken in Hindi. There are also many dialects like Bhojpuri and Haryanvi, amongst many others!


Bengali is India's second most spoken language. Bengali is primarily spoken in the Indian states of West Bengal, Jharkhand, Assam, and Tripura in the east. Bangladesh, The Middle East, the United States, Australia, Japan, the United Kingdom, and Canada are the countries where this language is spoken.


Bengali has evolved from the Indo - Aryan languages, particularly from Sanskrit, over more than 1,300 years. Bengali literature, with a millennium-long literary history, flourished during the Bengali Renaissance and is one of Asia's most productive and diverse literary traditions. In commemoration of the Bengali language movement, UNESCO designated February 21 as International Mother Language Day in 1999.


Marathi is India's third most widely spoken language. 83 million people in India speaks Marathi. Marathi is an Indo-Aryan language that is the official language of the western states of India, including Goa and Maharashtra. Marathi is spoken in about 42 dialects.


Marathi is one of the many languages descended from Maharashtri Prakrit, derived from Sanskrit. The earliest evidence of Maharashtri as a distinct language stems from the first century BCE -a stone inscription discovered in a cave at Naneghat, Junnar in the Pune district was written in Maharashtri using Brahmi script. According to inscriptions, Marathi was a standard written language by the 12th century. Marathi Day is observed on February 27, the poet Kusumagraj's birthday.


Check out our blog on the increasing importance of Marathi and other Indian languages here!


Telugu is a Dravidian language and India's fourth most spoken language. 81.1 million people in India speaks this language. The Government of India has identified Telugu as one of the six classical languages of India. This language is primarily spoken in Andhra Pradesh, Telangana, and Yanam (Puducherry). Beraad, Wadaga, Domara, Salavari, Nellore, Comtao, and Kamathi are among the dialects of this language. It is spoken in many countries, including the United States, the United Kingdom, New Zealand, Australia, the United Arab Emirates, and South Africa. As of 1996, the Telugu language has approximately 10,000 inscriptions, making it one of the most heavily inscribed languages. Telugu Language Day is celebrated every year on 29 August to commemorate the birthday of Telugu poet Gidugu Venkata Ramamurthy.


The Tamil language derives from the Dravidian language family. It is the official language of both Singapore and Sri Lanka and is widely spoken in Tamil Nadu and the neighboring South Indian states. Tamil is often considered to be one of the world's oldest living languages. It has a literary history dating back over 2,000 years.


Read about the scope of Indian Languages in the market as a language expert here.


Gujarati is an Indo-Aryan language - the official language of Gujarat, a state in northwest India, Gujarati is derived from Sanskrit. The Gurjars, who lived and ruled in Gujarat, Punjab, Rajputana, and Central India, spoke Old Gujarati, which is the ancestor of current Gujarati and Rajasthani. Gujarati is divided into three dialects: Parsi, Hindu, and Muslim. Despite the plethora of poorly established dialects and regional variants, Gujarati has undergone recent reclassification due to extensive regional distinctions in vocabulary and phrasing. The birth anniversary of the great Gujarati writer Veer Narmad, August 24th is observed as World Gujarati Language Day or Gujarati Diwas.


It is an official language in West Bengal, Bihar, Uttar Pradesh, Jammu & Kashmir, Telangana, and Jharkhand and also the official language of Pakistan. Urdu, like Hindi, is a Hindustani language. Urdu was chosen as Pakistan's official language in 1947 because it was already the lingua franca for Muslims in the north and northwest British India, while it had also been employed as a literary medium for colonial Indian writers from the Bombay Presidency, Bengal, and Orissa Province. Urdu is written from right to left using an extension of the Persian script, which is an extension of the Arabic alphabet. The Nastaliq style of Persian calligraphy is used to write Urdu.


Kannada is a Dravidian language and is spoken by 43.7 million people in India, mainly in Karnataka and in other south Indian states. This language is spoken outside of India in Australia, the United States, and Canada. Kannada is considered to have more than 20 dialects.


Old Kannada flourished during the Ganga dynasty in the sixth century and there are many epigraphs with Kannada engravings on them from this time period. The government of India designated Kannada as a classical language of India based on the recommendations of the Committee of Linguistic Experts formed by the Ministry of Culture. Georgia, a US state, declared November 1 as 'Kannada Language and Rajyotsava Day.'


Odia is the official language of India, with the majority of speakers residing in the state of Odisha. 37.5 million people in the country speak this language. Odia is spoken by approximately 3.10 percent of India’s population. Odia is the sixth Indian language to be classified as a Classical language, owing to its long literary tradition and lack of considerable borrowing from other languages. Odia's first documented inscription is from the 10th century CE. Odisha day is celebrated on 1st April as it became a separate province on this day.


Malayalam is spoken by around 34.8 million people in India, the majority of which live in the regions of Kerala, Puducherry, and Lakshadweep. The roots of this language can also be traced back to the Dravidian languages. The Vatteluttu script was the first to be used to write Malayalam. The current Malayalam script is based on the Vatteluttu script, which was supplemented with Grantha script letters in order to accommodate Indo-Aryan loanwords. Variations in intonation patterns, vocabulary, and grammatical and phonological element distribution can be observed along the parameters of geography, religion, community, occupation, social strata, style, and register. Like Kannada day, Malayalam day is celebrated on 1st November in India.


English, along with Hindi, is one of India's federal government's official languages. In some Indian states, including Nagaland and Arunachal Pradesh, English is the official language. Since the days of the East India Company in the 1800s, English has been taught in Indian schools.


As much as 70-75% of Indians do not understand it and rely on Hindi or other regional languages to communicate. If you are looking for language service providers to help you translate or localize content into any Indian language, look no further. Language Services Bureau offers services like localization, transcription, translation, and more to help you with your Indian Language needs. Translations are undertaken by native language experts – linguists with in-depth study of the target language which is their mother tongue, and of the specific domain of the document are chosen for each project. If required, certified Indian language translation [Indian language into English translation and English into Indian languages translation] can be provided for official documents to be submitted to different government / international authorities.