Importance of Translation in Environmental Law 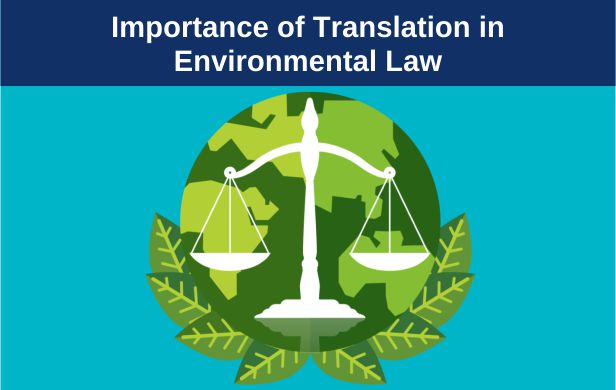 Poor environmental knowledge and awareness is a key concern for environmental authorities in the global economy as it leads to an inability to execute environmental policies and legislation. To solve this problem, it is important for the laws and regulations to be available in the local languages for the people to understand their rights and duties. Hence, effective and efficient translation and interpretation processes and services are required. Environmental translation, particularly for global legislation pertaining to governments and businesses, is an important component of developing an effective worldwide strategy. The importance of environmental translation in ensuring a fair playing field for firms is growing in the global marketplace.

The EU's environmental policy seeks multiple goals and, most importantly, promotes collaboration at all levels. The first shared objectives of a European environmental strategy were agreed upon by government leaders from various nations as early as 1972.


Chernobyl and Fukushima are two well-known examples of a global concern that is insufficiently addressed by all nations.


Information is essential for natural conservation, because the environmental policies of individual nations affect all people equally.


Smooth and polite communication is regarded internationally as a crucial foundation for making critical decisions, and skilled translators contribute significantly to the development of this foundation. In addition, contracts with rights and responsibilities for all parties serve to maintain standards and encourage the development of next stages.


Language services prove critical during the negotiations at round tables, and translators with legal experience facilitate the establishment and observance of environmental code of conduct through specialised translations.


Need For Translation in Environmental Law

In most EECCA nations, the institutional status of environmental inspectorates has lately been bolstered as compared to the past, in response to government-wide administrative reforms and, at times, international peer pressure. Several nations have established new policy instruments, such as Strategic Environmental Assessment and integrated permits, in response to international norms. However, disparities between new laws and unreformed bylaws continue to produce unreasonable regulatory requirements, making implementation and enforcement challenging. The application of Regulatory Impact Analysis (RIA) has been limited. Mandatory consultations are sometimes seen as a procedural burden rather than a means of balancing the interests of stakeholders. Although it is increasingly acknowledged that continual feedback from practise is required to amend environmental policy, such feedback is limited.


Why the Choice of Language Matters in the Environmental Law


In the 1980s, however, the term "global warming" gained popularity. During that time, other scientists also recognised and utilised the term climate change. However, it didn't take long for climate change to replace global warming as the preferred scientific phrase.


The phrase 'climate change' represents the scientific consensus in environmental research that rising greenhouse gas levels would result in a variety of climatic changes, not limited to rising temperatures and sea levels.


The gradual transition from 'global warming' to 'climate change' provided the global climate movement with the necessary offense and defense against many naysayers. Numerous doubters pointed out significant flaws in the global warming idea that rising temperatures would eradicate chilly winters.


In the years that followed, however, and continuing to the present day, many places of the world continue to endure cold temperatures and even blizzard-like conditions. Choosing 'climate change' as the authoritative word was ultimately the wisest option. This example demonstrates that nomenclature and, ultimately, how climate change is portrayed is one of the most important battlegrounds in the fight for climate change action.


When different social groups argue topics, they carefully select their words to support their respective narratives. But when it comes to law, the terms are rigid and may come across as hard to comprehend. Global companies and governments require translation services to make understanding as well as their process smooth and accurate so as to reach out to the target public effectively.