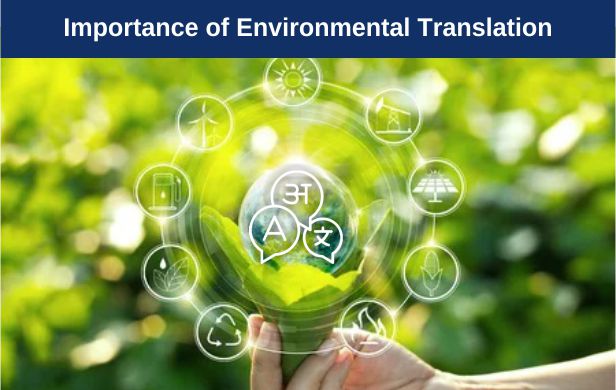 All hands must be on the deck when our planet stares at a grave threat such as climate change. In. So, how does translation fit into the fight against climate change?


The Treaty of Paris

The historic 2015 Paris Climate Agreement, dubbed "the world's greatest diplomatic triumph" by some, was published in all six official United Nations (UN) languages: English, Spanish, French, Chinese, Arabic, and Russian. Its intended audience is evident, as is the importance of translators in putting its suggestions into action.


Every stage of the endeavor relied heavily on translators. Before serious conversation among international parties could begin, documents describing the evidence and effects of climate change from throughout the world had to be translated into several languages. Interpreters were essential during negotiations and for translating the numerous speeches given, and the work material, including meeting notes and position papers, required a Herculean amount of multilingual transcribing and translating.


The impact of global warming in causing extreme weather events can be difficult to pinpoint, but the overall pattern is evident, and tales from all across are both devastating and vital for everyone to acknowledge. It may be the destruction of Caribbean islands by superstorms, epochal flooding in Southeast Asia, mudslides in the Andes, or the death of a lone rider in Australia's Beerburrum State Forest due to extraordinary heat. Witnesses in all languages contribute crucial first-hand reporting wherever the disaster occurs.

While long-term solutions are being created, there is an urgent need to learn how to live with the effects of climate change now, and multilingual research dissemination has become an increasingly important factor in keeping people alive.


When the Bolivian Mountain Institute NGO (Non-Governmental Organization) finished a study of glacier lakes in the Andes and discovered that 25 of them now pose dangers to local residents, the English- and Spanish-speaking researchers ensured that their report was produced in both languages. It also included translationsof eyewitness reports of glacial-outburst flooding, which could help local governments respond successfully in the future if comparable disasters arise.

NGOs have been utilizing teams of translators who understand the languages they serve as well as their intrinsic cultural perspectives, economics, and politics - which are critical for convincing local populations to implement changes - this helps ensure that their studies are of maximum value to parties working on climate change.


When the Mountain Partnership presented research to the United Nations for consideration, it delivered thoroughly translated versions in all six U.N. languages. The investment paid dividends when the United Nations adopted three mountain-oriented priorities in their 2030 Agenda for Sustainable Development.

Ecolinguistics is a new academic area that studies the role of language in the creation and possible resolution of ecological and environmental problems. Scholar Kjersti Flttum, for example, authored a paper titled "A linguistic and discursive take on climate change discourse," and students at the University of Bergen can now enroll in a Ph.D. research course named "Climate Change Narratives: Language Use in the Circulation of Climate Knowledge."

Private climate campaigners are also making increased use of multilingual transmission of climate change information. The influence of persuasive English-language content, such as Al Gore's film An Inconvenient Truth, has grown greatly thanks to subtitled versions in over 30 languages. Before the Flood, starring Leonardo di Caprio, is available in English with subtitles in 12 languages. These Hollywood stars have understood the obvious: engaging people all over the world in the fight against climate change necessitates speaking their language.

Translation Services are part of the solution.

As the debate over climate change shifts from persuasion to action, the international presence of non-governmental organizations (NGOs) and other advocacy groups continues to make them vital allies in the quest for solutions. The data they collect serves as the foundation for developing a climate change strategy, and their creative minds contribute to moving the issue ahead. As a result, the demand for accurate, rapid translation services across multiple languages has never been greater: they enable a global discussion