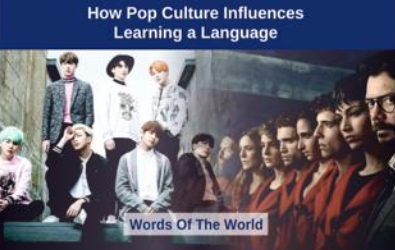 BTS Army, Comic Cons, memes and, of course, Netflix! The world sure has come a lot closer, thanks to entertainment media. People are connecting over 'fandoms' under varying genres, making off-beat pop-cultural references a global phenomenon.

It begins with one song, an anime, or a K-drama and leads to people all over the world, loving a foreign culture in its entirety. Vocabulary gets mixed, and words like "Kawai'' or "muchacho" become staples in your dictionary. It is effortless to fall in love with a language once you become acquainted with it. That is precisely why so many people choose to learn and work with foreign languages. Lyrics and scripts can expose you to entirely different worlds and help you see beyond what meets the foreign eye!

If you have been wondering how to use pop culture material abundantly available via various channels to learn anything from Mandarin to Spanish, you have come to the right place! Read on to understand how your phone, social media, movie and television series choices can promote your language learning.

Smartphones are the way to go!

Your phones are the most accessible devices that can connect you to the whole world! Making friends across nations is super easy, and it's not just with social media but with other tools that a smartphone provides access to. The in-built translation tool on your keypad, video calling or voice notes are some examples.

With as much as 62.07% of the world's population having access to a personal smartphone, the number of resources available on these smart devices might take you by surprise.

Some apps aid in you earning new languages. Language-oriented applications are specifically designed to provide a wide range of lessons on pronunciation and grammar. These applications are available for almost every mainstream language in the world - another easy access to help you understand the basics of what you are watching on your phones or listening through them!

Applications such as YouTube with recorded video lessons can help you enunciate each word and help you with native pronunciation.

From Money Heist to Crash Landing on You - Netflix has some great foreign movies and series. They have contributed to bringing foreign material in the mainstream and giving people a chance to peek into different cultures. Bella Ciao and Butter are just a few examples of the tunes that masses across the globe are humming.

With primary online streaming services such as Netflix and Amazon Prime, the amount of content available to practice skills of a new language via series and movies is significantly high. These platforms screen a wide range of feature films, TV series and documentaries across multiple languages with subtitles in the language of your choice.

Many have turned to spending time watching foreign movies, and entertainment shows with subtitles in their preferred language to help them grasp new words, phrases and slang usage better. World entertainment icon BTS's leader RM has even talked about how he picked up English while watching the famous American sitcom 'Friends'.

Pop Culture as a Learning Aid

Once you are interested in a language, the sky's the limit in what you can do with your newfound knowledge. Be it practising or learning a little about how translations work. Pop Culture is an excellent playground for you.

Watching interviews or reading the subtitles on Netflix can get you a lot of insight into how a language is spoken or how it's translated. Language learning with Netflix is a feature that can allow you to choose subtitles from 2 languages that can be displayed simultaneously. This helps you visually pair the translations of the dialogue, enabling learning new vocabulary.

Pop culture has proven capable on developing language skills across the world. With many seeking entertainment, ideas and content pertinent to them, learning languages is just an additional offering that pop culture can provide.

This is just the beginning! Pop Culture has so much more to offer. Loving a song or finding a movie interesting can be your entry into the world of a new language! We at Language Service Bureau offer language programs and orientation course that teach you the basics of translations so that you can further your knowledge about your favourite language. Who knows, maybe one day you could be the one subtitling an international TED TALK!