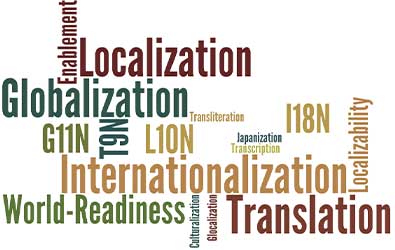 The advances in information and communication technology have contributed to the formulation of a global business context, though one of the most fundamental trade barriers still exists: language. That’s why it is important to not only localise your products or services into the target market’s language but also understand the customs, culture and sensitivities to make sure the product is a success in that market.

“Content is king”, they say … but of what use is it if in a language one does not understand? Businesses have long ignored the language impact in their communications!

Africa is the last frontier to cross for the world - there is a high language diversity here, though Arabic, French, Portuguese and English are supposedly widely known due to past colonisation. It is home to 1/3rd of the world’s 6000 languages. Swahili is the most spoken language followed by Amharic, Yoruba, Oromo, Hausa, etc. What’s more? 7 of the 10 fastest growing economies are in Africa, beating even the Asian tigers in growth rates – so this is a market a business can’t afford to miss!

Asia, especially India, will be the global growth engine for various industries, thanks to its growing consumer power and internet penetration in the remotest corners. India is a densely multi-lingual country - despite 30 languages spoken by more than a million native speakers each, and over 1600 dialects, it is still considered as an English-speaking country – however, hardly 10-13% of the population understands English. In case of Hindi, only half of the Indian population can understand it.

It is therefore a myth to believe that English will be all pervasive, or Hindi will help you communicate with your target customers. A consumer is more likely to buy a product/service when communicated in his/her language as per many surveys the world over. In a survey of App Annie, it was found that users in most Asian countries prefer to download and buy apps localized in their language. On the same lines, according to the KPMG survey, 88% Indian language internauts are more likely to respond to an Indian language ad.

After having saturated markets in the Tier 1 cities of the country, businesses are already looking at the Tier 2 and Tier 3 cities as well as villages of India for an untapped market. The rural internet users in fact, have a higher engagement level than their urban counterparts. However most of them state limited language support as a major challenge for accessing various online apps and sites.

Local language enablement is therefore imperative for the following categories:

Translation and Localization as an integral business practice proves to be an essential corporate strategy to succeed in today’s market. End-to end localisation enablement is a critical requirement. Take for example, a user who clicks on a local language ad and lands up on a page in a different language .. or if some images on the website are in a different language... the internaut is bound to be disgruntled!

Though Machine translation is the current buzz word for the language industry, it is still in a nascent stage for all Indian languages! Partnering with a professional Language company is therefore imperative to be able to speak locally to your clients.

When companies write their corporate content or localize it, it is crucial to have a Language Services Provider (LSP) to guide them with their insights on cultural sensitisation, content optimisation, geo-political sensitivities, various scripts of the same language, locale specific terminology, etc. During our 40 years of business experience in the industry, we have seen businesses facing entry barriers due to lack of localization of product or service information. Sometimes companies have tight budgets for Localization whereas Marketing enjoys wealthy budgets. They fail to understand that localization is critical to Marketing, in an international and local frame of reference. Unfortunately, such businesses don’t even have their marketing and commercial material or website ready for the target market!

On the other hand, in an actual business case, one of our clients saw a 40% rise in enquiries after multi-lingual localisation of their website! Only those businesses which convert this tremendous opportunity in India and other such roaring markets with the help of localization can hope to stand their ground in times of disruptive business trends.