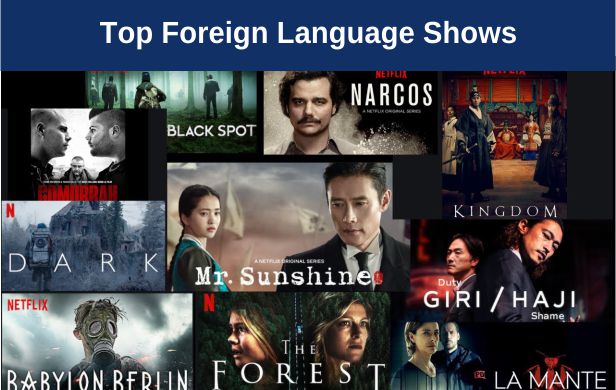 These shows make reading subtitles completely worth it!


There is so much binge-watching going on right now that it may appear that you have seen almost everything worthwhile. However, the OTT collection is far more extensive than a cursory glance would suggest. It would be a pity to lose out on some of the most fascinating and evocative shows created worldwide simply because their names are unfamiliar. It's a big world out there, and traveling through time and space to the worlds of "Babylon Berlin" or "Terrace House" is one way to feel like you're in another civilization without leaving your house.


Hits like "Parasite" have persuaded even the most cynical viewers that, rather than being something to avoid, subtitles are the gateway to a vast universe of riveting entertainment. So go and check out the edgy thrillers, engrossing dramas, and deliciously diverse reality series available on online platforms from Mexico, France, Spain, Korea, Japan, Germany, and many other countries. Plus, brushing up on those high school language studies and developing some cross-cultural know-how never hurts.

It’s hard to imagine a show more eccentric, shocking, stylish than “Babylon Berlin,”. This big-budget series is set in the politically combustive Weimar period of 1920s Germany. Starting with the highjacking of a Russian train, it introduces a Cologne detective who comes to town to investigate an extortion ring. The plot veers into many different directions at once and viewers are in for a rollercoaster of a ride. Full of engrossing and lavishly crafted periodic details, this show is a history-buff’s dream. With 3 nail-biting seasons, the story slowly unravels with a feast of narrative as well as visual cues intricately woven together.

Set in the fictional town of Gongjjin, this slow and sweet South Korean drama was a big hit internationally. It ranked top for eight weeks, and the final episode received a 12.665 percent nationwide rating with over 3.2 million views. It also became one of Netflix's most-watched non-English television shows and one of its longest-running hits, spending 16 weeks in the global top ten. It was enjoyed by K-Drama enthusiasts but also amassed a larger audience because of its relatable themes and lovable characters. Watchers waited with bated breath as the episodes were released and watching it with many others online also started various international discussion groups and subreddits.

Cable Girls has everything you're looking for—corporate intrigue, romance, or family drama. The Spanish series, which aired from 2017 to 2020, is set in late 1920s Madrid and follows the lives of four switchboard operators as they try to overcome the many restrictions that make women liable to men. The series is shot in Madrid, Spain's capital, in numerous settings that have been transformed to send viewers back in time. The costumes, dialogues, and sets are all a representation of the 1920s era. The protagonists live in La Plaza del Alamillo, with the Pension Dolores serving as their home and the street Lope De Vega serving as their commute to work. The show is an emotional look into the lives of women and the country with a heartwarming tale woven in.

This Netflix original comedy starring Israeli actress Shira Haas follows a young married lady who flees to Berlin to escape life in Williamsburg's tight Satmar enclave. The show is primarily set in Berlin, throwing a comprehensive eye over the city's majestic structures and huge boulevards in neighborhoods such as Kreuzberg and Charlottenburg. Viewers will also get a view of the picturesque Wannsee Lake, located on the city's southwestern borders and where Berliners cool down in the summer. The show also provides an exceptional moment of representation: over half of the dialogue is in Yiddish, a language that is rarely represented in popular culture and that most people are likely unfamiliar with. Finally, Unorthodox is the ideal kind of show since it expands viewers' worlds in more ways than one.

Bordertown (Finnish: Sorjonen) is a Finnish crime drama and Nordic noir television series created by Mikko Oikkonen and starring Ville Virtanen as detective inspector Kari Sorjonen. Bordertown premiered on Yle TV1 on 16 October 2016. The debut was watched by 1.1 million viewers and set a record for a Finnish series.] Total viewership for season one was an average of one million viewers.


Brush up on your language skills and soak in some culture as you watch these international series. You can also profoundly analyze the subtitles and pick out the faults (if any) to make this an educational watching experience.


Put your language skills to use in sub-titling, transcription, etc. and become a professional language expert with Language Services Bureau.