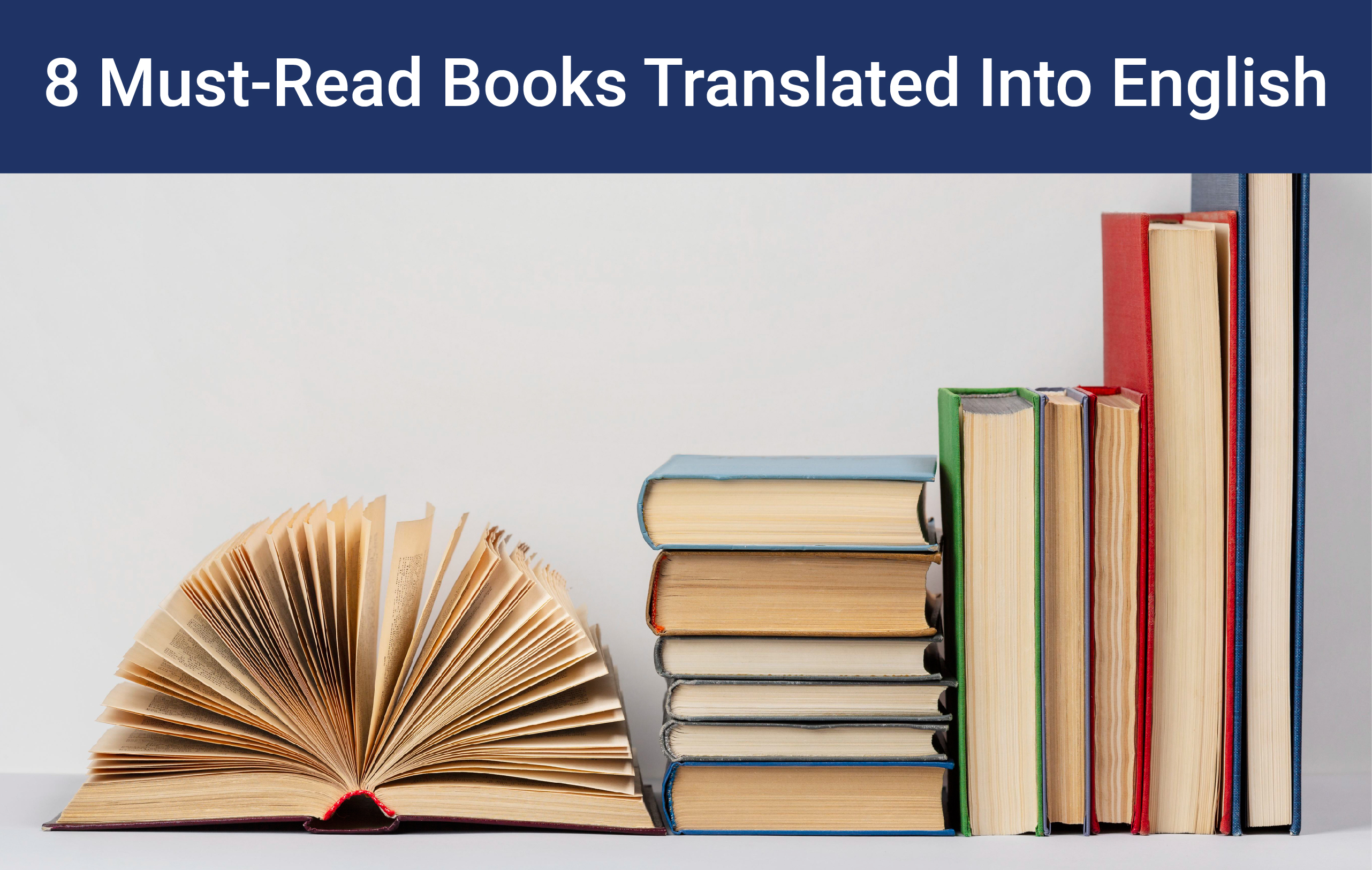 With globalization effectively altering the world as we know it, a niche that has seen significant growth by leaps and bounds is the literature industry.


An increasing emphasis on literary translation services has resulted in a plethora of incredible works getting translated and published in different languages. With so many different languages sharing thought-provoking stories, the only question that remains is where to begin?


Literary translation has allowed for the creative transformation of several classics in different languages to English, leaving you spoilt for choice concerning your next read.


Are you interested in exploring different kinds of literature across unique cultures from all over the world? If yes, keep reading to discover our list of the 8 must-read books translated to English!

Stephen King once said, “Books are a uniquely portable magic,” and experimental readers will be inclined to agree!


Excellent wordsmiths from around the globe have put forth some truly magical books, the translations of which are now being appreciated by literary enthusiasts.


The 8 must-read books translated into English are:

If you enjoy humorous novels that combine rants and confessions, then you will enjoy the original work by writer Thomas Bernhard. This bittersweet, ironic, and hilarious book is centered around a man who deviates into the field of art to escape from his life. The genre thus created continues to be enjoyed and appreciated at large today.


Comic rage runs replete throughout the book, promising to leave you engrossed until the last page!

Written pseudonymously, ‘My Brilliant Friend’ is an almost-autobiographical piece that chronicles the friendships and lives of two young women - Elena and Lila.


Translated from Italian, the novel is written with a significant emphasis on the intuitive female perspective. The story discusses women’s voices, the meaning of being a woman, and the power associated with a woman’s voice.


Readers are drawn into the lives of the two friends, who take different paths but continue to maintain their innocent connection. This is a novel recommended for readers who enjoy thought-provoking work, a book that is just as wise as it is wistful.

Gabriel Vasquez is an author who is now recognized as one of the most prominent voices in Latin American fiction. With a career that spans two decades, ‘The Sound of Things Falling’ (brought out two years later in English after the release of ‘El ruido de las Cosas al caer’ in 2011) has cemented his reputation.


The ostensible protagonist and narrator is Antonio Yammara, a law professor whose actions turn his world upside down. Amid the turmoil, Yammara is forced to look back at his and Colombia’s recent past - a past filled with violent culture and the distorted effects of narco-trafficking.

Fiston Mwanza Mukila is a Congolese author whose work is filled with static characters that, ironically, produce significant momentum in the book. The title of the book refers to a nightclub that is located in an archetypal setting in the country.


Throughout the novel, the author continues to emphasize the wary coexistence of oppression and liberation. This duality is brought out by the friendship between two friends, Requiem and Lucien. The characters find their loyalty continually tested by the nefarious characters around them and their ambitions.

One of the newer books by the Norwegian author, ‘Autumn’ is the first in a series of four different books. The novel includes short essays written for each day of the year about a random object or situation. Readers have often described this work as a poetic version of ‘Mythologies’ by Roland Barthes.


While this is one of the titles in this list that does not 100% qualify as a ‘translated novel’, the entire series is now recognized as a part of the genre of autobiographical fiction.

6. Eka Kurniawan - Beauty is a Wound

‘Beauty is a Wound’ is a polyphonic and epic multi-genre novel about the story of sex worker Dewi Ayu (and her four daughters). The gripping plot is set against the background of colonialism in Indonesia and the violent independent struggles that prevailed under Suharto’s despotic rule.


Not a book for the faint of heart; the story is flooded with themes of bestiality and murder. However, the evocation of fondness for the tropes, sexual politics, and magic realism make this a read that has gained significant popularity in its translated version.

It took decades for this book, first published in 1977, to be translated into English. However, the themes of menacing figures, fascist governments, and strange conspiracies hold true and are relevant even today!


The story follows the protagonist who investigates a series of horrific and supposedly-supernatural events in Turin. The protagonist conducts investigations by interviewing participants and witnesses, unknowingly attracting the attention of dark & sinister forces.


The chilling conclusion to this novella will have you coming back again long after the last pages are turned.

Winner of the Man Booker International Prize in 2018, ‘Flights’ is distinctly structured, with fragmented chapters linking with different sections spread across the plot.


Some of the chapters appear briefly, make their intended point, and vanish, while others continue into full-fledged stories. Tokarczuk deftly and skillfully shifts perspectives from memoir-esque styles to intimate expressions throughout the book.


This is a bold work of fiction that is a must-read if you enjoy exploring radically different styles of literature in one book!


Adding the above-listed books to your summer reading list can be a great way to introduce yourself to some brilliant translated works by contemporary authors around the globe. We can promise that your appreciation for literature will be significantly enhanced post a few reads from this list!