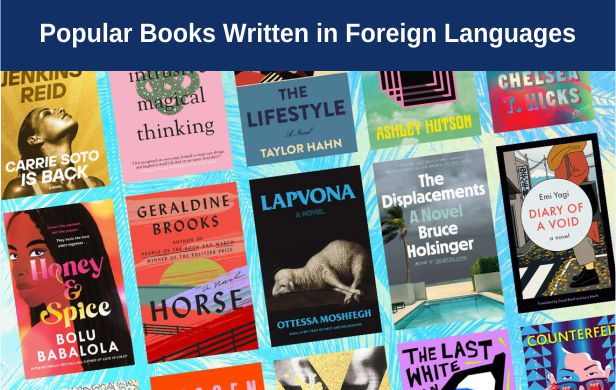 Reading books is one of the most enjoyed activities for millions across the world. Many choose to engage with books and ‘read for pleasure’ or explore new concepts and ideas.


Reading, as a habit, can allow you to escape into magnificent worlds and live stories and scenarios that you may not experience otherwise. One of the advantages of literature is also that you have the creative freedom and imagination needed to bring life to the literature you read.


Literature is often also studied to learn something new. And this is precisely where the concept of reading books written in foreign languages comes into the picture!


Keep reading to learn more about 5 popular books that have been written in foreign languages and are worth a read!

Why should you consider reading translated books that have been written in foreign languages?


Reading translated literature written in other tongues is a remarkable opportunity to gain access to unique methods of storytelling, politics, philosophies, traditions, and cultures from far-flung nations. With foreign literature, you can explore new places and meet people from different walks of life, all by soaking in the skills of a foreign storyteller.

‘Crime and Punishment’ may be among the heavier books on our list, but is regarded as a classic foreign-language novel globally. Dostoyevsky originally wrote the crime thriller for a serial that was published in 1866.


The story follows the strategies employed by a young Russian student to murder an amoral pawnbroker.


Not only is ‘Crime and Punishment’ a wonderful story of revenge and grit, but it is also an interesting philosophical piece. Throughout the novel, the protagonist Rodion Raskolnikov muses over several different kinds of philosophical reasons that justify his crime.

‘News of a Kidnapping’ is a fine example of foreign literature based on true events that can introduce you to a unique spin on traditional storytelling. The book investigates and narrates a series of kidnappings. These kidnappings were largely perpetrated by drug cartels that were a part of the guerilla war of terrorism. This was a war that intended to prevent the Colombian government from deporting the groups to the United States.


The book discusses real-life kidnapping, with the author going into explicit detail about the emotions of the victims and their entire families. The personalities of the kidnappers are also highlighted in an almost ‘beast-like’ light. This provides you with a fascinating insight into the vast realms of the human psyche.

‘The Little Prince’ is among the most poetic storybooks on our list, which is known for its elegant imagery and whimsical watercolour illustrations. If you enjoy pieces of literature that transport you to another world, then this is a must-read!


The story begins with a pilot who gets lost in the Sahara Desert. As he tries making his way through the vast planes of sand, he finds a little boy with blonde hair.


This seemingly-inconsequential meeting kickstarts a story that poignantly highlights the importance of life.


Initially published in 1943, this book has grown to become a worldwide favourite and is now published in more than 380 languages!

Another French classic and popular read is ‘The Count of Monte Cristo’. Written by the same author as the equally enjoyable ‘The Three Musketeers’, this book is regarded as one of the most popular fictional works globally.


Set in the period just before Napoleon’s Hundred Days, the story centres around protagonist Edmond Dante's wrong imprisonment and quest for revenge.


Despite being published back in 1844, this is a book that shares significant insights into human nature that are relevant even today. The plot also continues to be adapted into various different kinds of audio-visual media.

‘The Odyssey’ is an Ancient Greek poem that is a treasured masterpiece and a significant part of collective historical literature. The poem is estimated to have been composed in the 8th century BC, following the fall of Troy.


‘The Odyssey’ revolves around the story of hero Odysseus’ journey back home to Ithaca. During the course of his voyage, he encounters several fascinating circumstances. These include hearing the song of the Siren and escaping the cyclops Polyphemus.


The story, however, ends bitterly when Odysseus finally reaches home and realizes that all his men are dead and all his ships are lost at sea.


Each of the above pieces of literature can be a wonderful stepping stone to exploring uncharted territories. Written in foreign languages and translated into several languages, these books are guaranteed to take you on a journey!